This is the multi-page printable view of this section. Click here to print.

Return to the regular view of this page.

One of the unique features of OpenFunction is its simple integration with various backend services (BaaS) through Dapr. Currently, OpenFunction supports Dapr pub/sub and bindings building blocks, and more will be added in the future.

In OpenFunction v0.7.0 and versions prior to v0.7.0, OpenFunction integrates with BaaS by injecting a dapr sidecar container into each function instance’s pod, which leads to the following problems：

To address the problems above, OpenFunction introduces the Dapr Standalone Mode in v0.8.0.

In Dapr standalone mode, one Dapr Proxy service will be created for each function which is then shared by all instances of this function. This way, there is no need to launch a seperate Dapr sidecar container for each function instance anymore which reduces the function launching time significantly. 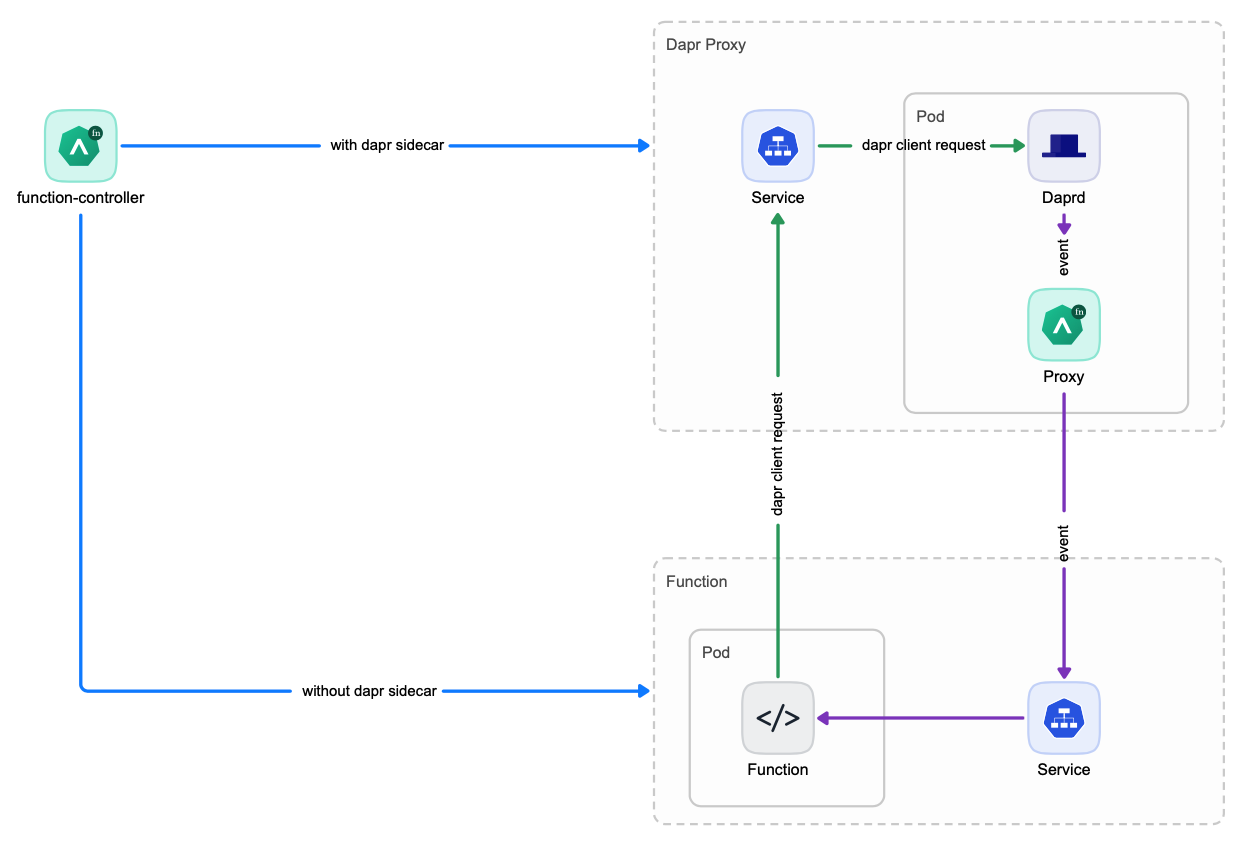 So now you’ve 2 options to integrate with BaaS:

You can control how to integrate with BaaS with 2 flags, both can be set in function’s spec.serving.annotations:

There’re default values for both of these two flags if they’re not set.

Below you can find a function example to set these two flags:

Here you can find more information about OpenFunction v0.8.0.

OpenFunction is a cloud-native open-source FaaS (Function as a Service) platform aiming to let you focus on your business logic only. Today, we are thrilled to announce the general availability of OpenFunction 0.7.0.

Thanks to your contributions and feedback, OpenFunction 0.7.0 brings more exciting features like OpenFunction Gateway, async and sync functions of Java and Node.js, and Helm installation. Meantime, OpenFunction dependencies have been upgraded for better user experience.

Starting from OpenFunction 0.5.0, OpenFunction uses Kubernetes Ingress to provide a unified entry for sync functions, and an Nginx ingress controller must be installed.

The OpenFunction community has been striving to support more programming languages:

OpenFunction will support more programming languages, such as Python and Dotnet.

Use Helm to install OpenFunction and its dependencies

Previously, we use CLI to install OpenFunction and its dependencies. Now, this method has been depreciated.

In OpenFunction 0.7.0., we use Helm to install OpenFunction and its dependencies, which is more cloud-native and solves the problem that some users are unable to access Google Container Registry (gcr.io).

When trying to understand and diagnose the distributed systems and microservices, one of the most effective methods is the stack trace. Distributed tracing provides a holistic view of the way that messages flow and distributed transaction monitoring for Serverless functions. The OpenFunction team collaborates with the Apache SkyWalking community to add FaaS observability which allows you to visualize function dependencies and track function invocations on SkyWalking UI.

Going forward, OpenFunction will add more capabilities for serverless functions in logging, metrics, and tracing. You will be able to use Apache SkyWalking and OpenFunction to set up a full-stack APM for your serverless workloads out-of-the-box. Moreover, OpenFunction will support OpenTelemetry that allows you to leverage Jaeger or Zipkin as an alternative.

​​Asynchronous function introduces Dapr pub/sub to provide a platform-agnostic API to send and receive messages. A typical use case is that you can leverage synchronous functions to receive an event in plain JSON or Cloud Events format, and then send the received event to a Dapr output binding or pub/sub component, most likely a message queue (e.g. Kafka, NATS Streaming, GCP PubSub). Finally, the asynchronous function could be triggered from the message queue. See this guide for the quickstart sample. 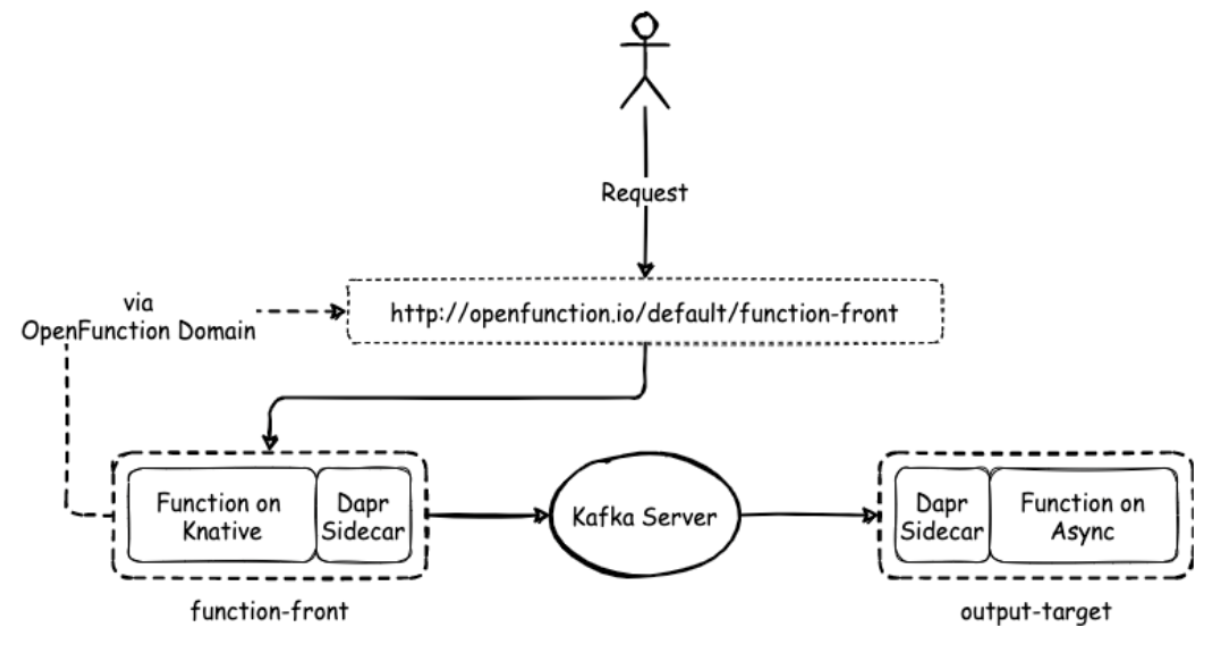 OpenFunction 0.6.0 integrates KEDA ScaledObject spec which is used to define how KEDA should scale your application and what the triggers are. You just need to define the lower and upper bound in the function CRD without changing your code.

Meanwhile, the OpenFunction community is also developing the ability to control the concurrency and the number of simultaneous requests, which inherits the definition from Dapr and Knative. A typical use case in distributed computing is to only allow for a given number of requests to execute concurrently. You will be able to control how many requests and events will invoke your application simultaneously. This feature will be totally supported in the next release, stay tune! If you are interested in this feature, check out the active discussion for detailed context.

Watch this video and follow with the hands-on guides to practice.

You can learn more about OpenFunction 0.6.0 from release notes. Get started with OpenFunction by following the Quick Start and samples.

Thanks to these contributors who contributed to v0.4.0!